“By wisdom, a house is built, And by understanding it is established; And by knowledge, the rooms are filled With all precious and pleasant riches.” – PROVERBS 24:3–4

Throughout the world, there are many monumental structures with religious ties. One of the holiest of lands around the globe is Jerusalem, it’s also one of the oldest cities in the world. Jerusalem is believed to be the location of the resurrection of Jesus. Jerusalem is home to Jewish Israelis, Haredi Jews, and Palestinian Arabs. The architecture in Jerusalem is visually striking and vastly different from what we’re used to seeing in the UK, it’s full of history and tells us stories of our past. 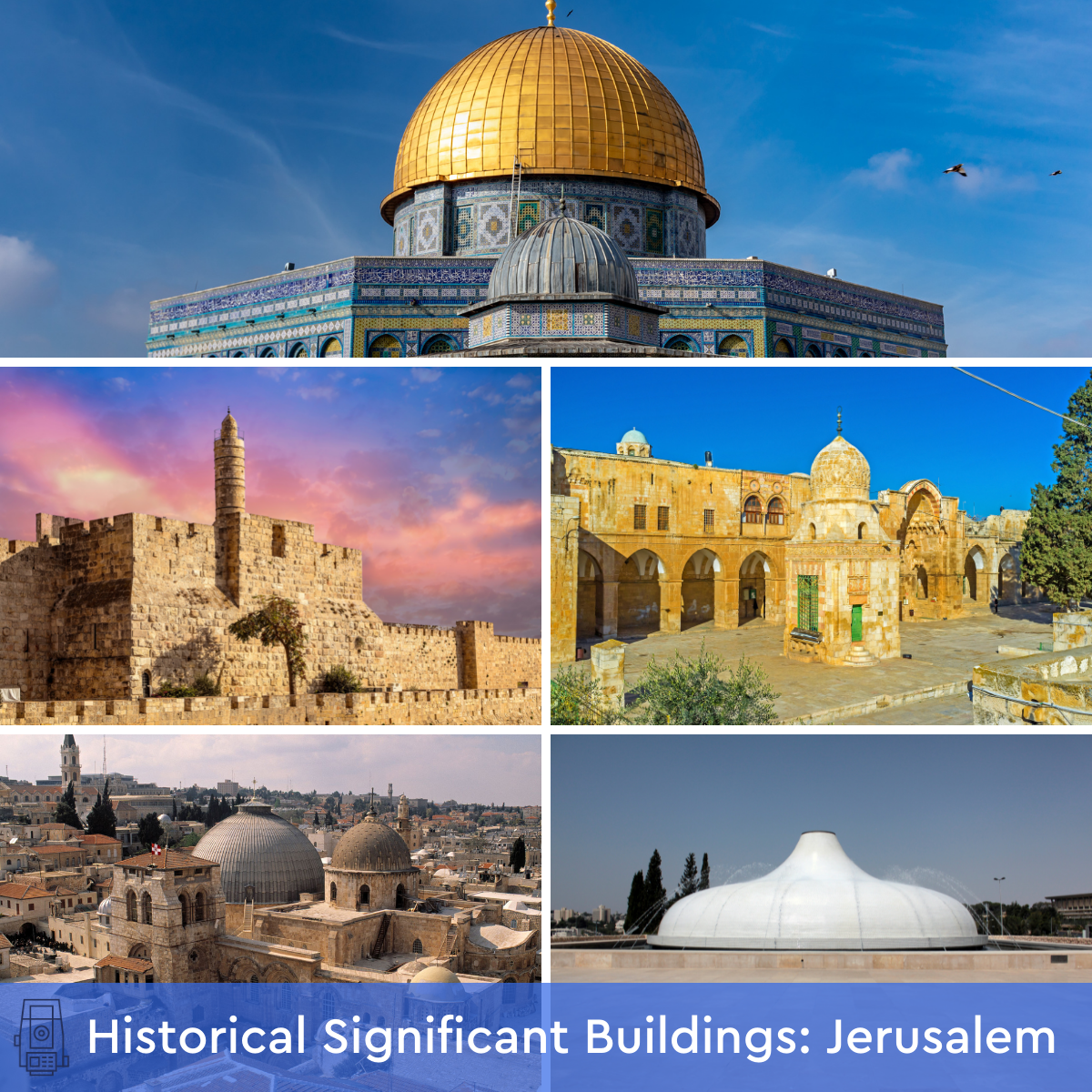 Church of the Holy Sepulchre

Located in the Christian Quarter, Old City of Jerusalem, The Church of Holy Sepulchre dates to the fourth century. Its significance within Christianity is because of the sites it contains. The site where Jesus was crucified and the tomb he was buried and resurrected in, which remains empty. Also inside the church are the four stations of the cross, which represent the final parts of the Passion of Jesus (Life of Jesus). The Church of Holy Sepulchre is part of a pilgrimage taken by Christians, as it is the site of the resurrection. Today Jerusalem is shared, as being the holy land, by various religions, including Greek Orthodox, Roman Catholic and Armenian Apostolic.

The Tower of David is located near the Jaffa Gate, Old City, Jerusalem. It contains important archaeological finds (dating from over 2,500 years) such as a tobacco pipe and pottery fragments. The Tower is currently under renovation, it has taken five years to design so it will still blend in with the surrounding architecture. Archaeologists are using photogrammetry to create 3D digital models of the Tower, which is creating new insights and dimensions for the archaeologists to see the space differently, in a way not seen by human vision.

Dome of the Rock

Dome of the Rock sits upon Temple Mount. Inside the dome is the Foundation Stone (or Noble Rock). The stone bears great significance in the Abrahamic religions (Judaism, Christianity, and Islam being the main religions), as this is known as the place where God created the world and Adam, the first human. The Dome itself is an Islamic shrine, it was originally created on the orders of Abd al-Malik between 691-692 CE. The Dome of the Rock has inspired such buildings as, the Church of St Giacomo in Italy, the New Synagogue in Berlin, and the Mausoleum of Sultan Sleiman the Magnificent in Istanbul, amongst others. The internal and exterior of the Dome are covered in mosaics, which are made up of Arabic script.

Shrine of the Book

The Shrine of the Book is a wing of the Israel Museum in the Givat Ram neighbourhood in Jerusalem and holds the Dead Sea Scrolls. The Shrine is one of Jerusalem’s newer structures and it was built in 1965. Designed by architects Armand Phillip Bartos, Frederick John Kiesler and Gezer Heller, it took seven years to complete. The Shrine of the Book was built with the purpose of displaying the Dead Sea Scrolls (ancient manuscripts discovered between 1947 and 1956) the dome protects the scrolls from exposure whilst on display to the public. Inside the Shrine is a rotating display, which alternates between the different fragments. However, people can see all the scrolls using the Google tool on the Israel Museum website.

The Fountain of Qayt Bay was built by the Mamluks (freed slave soldiers) of Egypt. The Fountain is in the western esplanade of the Temple Mount in Jerusalem and built in the 15th century. It’s considered the most beautiful edifice in the Al-Haram Al-Sharif (Temple Mount) after the Dome of the Rock. The Fountain of Qayt Bay is a three-tiered structure that is over 13 metres high. The original fountain was renovated by Sultan al-Ashraf Qaytbay between 1468-1496 as an extension to Madrasa al-Ashrafiyya.

There’s no doubting Jerusalem is full of historical and religious significance. The architecture alone is detailed, intricate and striking.

The first modern survey of Jerusalem was conducted in 1864, led by Captain Charles Wilson. The aim of mapping Jerusalem was to precondition the baron land and improve the city’s water foundation, to make settling a reality.

Jerusalem uses the Israeli Transverse Mercator (ITM), which is also known as the New Israel Grid. This is the new geographical coordinate system for Israel, which has replaced the grid system originally used, known as the Palestine Grid. ITM is based on a Universal Transverse Mercator, as are all grad systems throughout the World. In the UK, we use the Ordnance Survey. Each uses a grid based system, with Easting and Northing co-ordinates.

Persevering history is important and Powers would love the opportunity to help you with. Do you or your company have any new projects lined up we could offer our measured building surveys? Get in contact with us by phoning 01928 734473 or email surveyors@powersuk.com for a no obligations quote.