119 million people visit Manchester each year. Manchester is a hub of vibrant culture, people, and architecture. The city has been immortalised in various film and TV productions and through music from the many iconic bands who hail from the city. 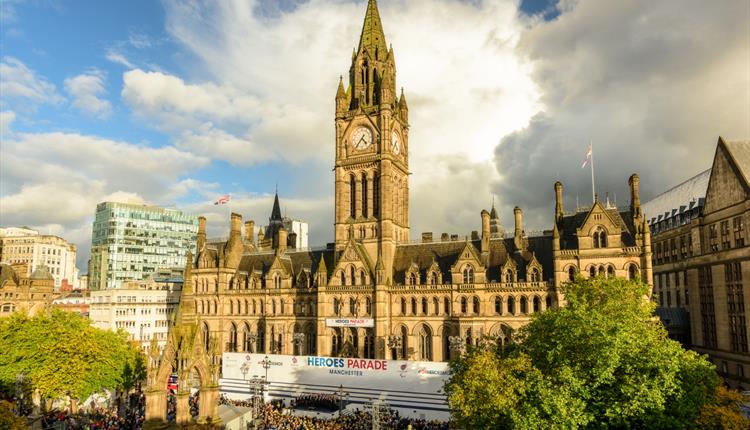 “And on the sixth day, God created MANchester.” – Leo Stanley

Manchester is the main drive behind the Northern Powerhouse. The city has iconic areas such as the Lowry, Salford Boys Club, and Canal Street. It has a vibrant, rich culture.

Built in 1877, Manchester town hall is considered one of the best examples of Victorian, Neo-gothic architecture in the UK, and it’s also one of the most important Grade I listed buildings in England. It is home to Manchester City Council and several other local government departments.

The clock tower is the main focal point of the town hall. It measures 280 feet tall, with 173 steps leading up to the bell chamber and clock. The mechanism was made by Gillett and Bland (notable tower clockmakers in the 19th century). The clock tower has 24 bells, the largest being the Great Hour Bell. It weighs 8 tons and is named Great Abel, named after Abel Heywood (Mayor of Manchester at the time of its opening). The clock face is made from Polish glass.

Manchester Town Hall was built as the original town hall was becoming too small. As business needs grew, so did the need to expand.

Designed by architect Alfred Waterhouse, whose design aesthetic was based on Victorian Gothic Revival architecture. Waterhouse won a competition to design the town hall. Waterhouse is also known for designing the Natural History Museum in London.

Ford Madox Brown painted twelve murals in the Great Hall. Work began on the murals in 1879 and was completed the year of his death in 1893.

Except for the last five, all murals are painted onto the wall, as Brown moved back to London due to his ill health. His move meant he had to switch to canvas’ and post them back to Manchester.

The theme of the murals is based on the importance of Christianity, commerce, and the textile industry history within the city. They’re a visual representation of the leaders of Victorian Manchester.

During the 1940s plans were created to demolish the town hall. Planners felt the ‘sooty’ building was no longer fit for purpose. Planners wanted to replace it with a new town hall, in an Art Deco style. The demolition never happened, due to coming up against the obstruction of post-war austerity.

Manchester Town Hall is the site of exceptional national, architectural, and historical importance, which is why it’s a Grade I listed building. It is one of several buildings which make up 2.5% of England’s listed buildings.

Powers are a part of the history at Manchester Town Hall when we were tasked with creating internal floor plans and elevations for some of the interiors, a topographic survey of Albert Square, the town hall, and the surrounding streets, along with underground utility and plans with CCTV coverage.

Internal elevations, showing architectural elementsThe topographic survey enabled our client, Mace, to pedestrianize Albert Square and the surrounding roads, allowing for 20% more space for businesses to have outdoor space and improving the vital security and safety of pedestrians from passing traffic.

Powers produced a full floor plan and internal elevations of the basement and of other specified areas within the town hall for redesign and refurbishment.

Powers also conducted underground utility detection (UUD), providing the underground story. Utilities are colour coded and scaled accurately to represent the site as-is. The UUD included drainage footage from CCTV. From this CCTV video, Powers were able to provide Mace with a record of the material of the pipe, what depth it is, how much the pipe drops and any blockages in the pipes such as root balls.

To record a moment in Manchester’s historic timeline is a privilege.

Do you have any new projects coming up? Contact us today on 01928 734473 or by email surveyors@powersuk.com