Tranquil in its design. Maggie’s Centre, West London seems a million miles away from the hustle and bustle of the busy London streets. A place for those undergoing treatment, to rest and relax. 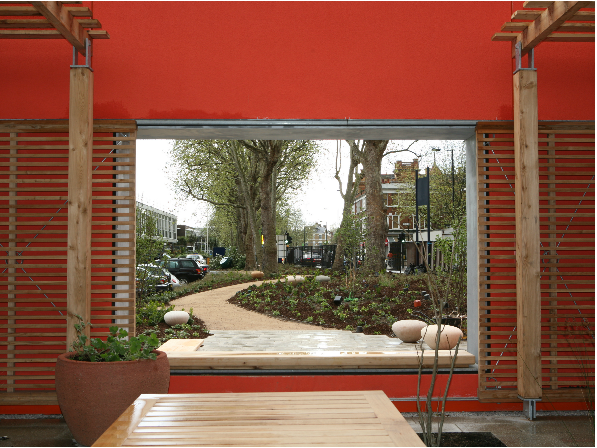 Maggie’s is a charity, offering help, advice, and a safe space for those suffering from cancer with the centres around the UK, and globally. Maggie’s does exceptional work.

The first Maggie’s Centre opened in Edinburgh in 1996. Founder Maggie Keswick Jencks was herself diagnosed with cancer.

After being told the horrific news of her cancer, Maggie and her husband Charles were moved into a windowless corridor to process the news. While waiting in this dark, cold place, they discussed a need for somewhere ‘better’ for people to go. A place outside of the hospital walls, but still close by.

You can read more on Maggie’s story and the background of the centres here.

Bright orange walls, light open spaces and transitional walls, Rogers’ concept to create a centre nestled in a protective wrap. As quoted by Rogers “The idea was to try to minimise the overbearing impact of Charing Cross Hospital. The roof, the landscaping, the hearth inside, the views out, each was to take you away from the hospital and the bustle of the road.”

Back in 2017, Powers were asked by Steve Morgan Foundation to carry out topographical surveys before work started on developing the centre. It was then repeated once the clearance work was completed.

Powers donated their time and skills to the charity.

The new Maggie’s Centre replaced a temporary facility that was operating on the site. The new, functional centre opened in 2021.

You can read more about the Maggie’s Centre, Wirral, and Powers involvement in this case study.

Check out the variety of services on offer or visit the contact us page.