How Powers would do survey work the Houses of Parliament

Guy Fawkes wanted to blow up the Palace of Westminster during the State Opening of Parliament, in the hope of killing James I and his chief ministers. However, he didn’t manage it, but it leads to an interesting question. How would we ensure the Houses of Parliament could be rebuilt today if they were burnt down or damaged in a natural disaster?

Of course, being land surveyors, we would naturally assume that whoever oversees the management of the Houses of Parliament would already have a detailed measured survey showing the exact measurements, features, and details that could be used to recreate a replica.

Originally built in 1097, The Palace of Westminster includes the largest hall of its time. The building we know today was completed in 1840 and was once home to King Henry VIII.

In this article, we show you the measured surveys that the Powers team would conduct of the buildings to ensure the Houses of Parliament could be successfully rebuilt. 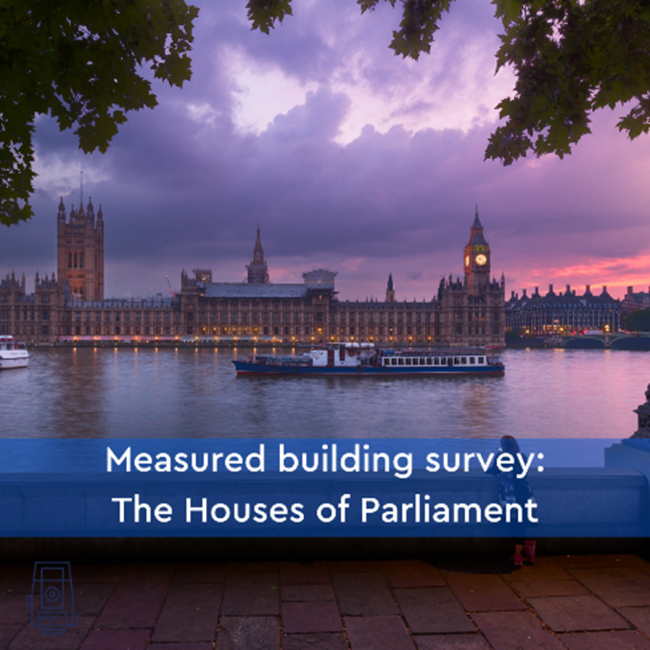 The Houses of Parliament – a measured building surveyor’s dream

What measured surveys would the Head of Restoration and Renewal at the Houses of Parliament need to ensure its ongoing safety and repair?

A topographical survey and drawing would show the contours of the land, boundaries, building footprints, changes in level, service covers, foliage, roads and paths within and adjacent to the site.

Powers’ 2D or 3D digital drawings would provide information for any designers working on the Houses of Parliament, as they will be able to see ground levels and identify physical and legal boundaries.

If the architects working on the Houses of Parliament wanted to expand the building, a topographic drawing would allow them to accurately visualise the site and the extent of the boundaries of the property.

Above is an example of a 2D external elevation of a historic house drawn up for a client. 2D elevation drawings accurately depict the face of a building and the associated building and ground levels. On the above example, the ground is shown to be sloping away to the right. This may not be visible to the naked eye and would only be seen in a drawing. The cyan lines show the window details, such as the designs and frames.

An external elevation drawing of the Houses of Parliament would look similar to this, although it would be a lot more ornate, requiring more detailed drawings if they were to be used to recreate the designs. 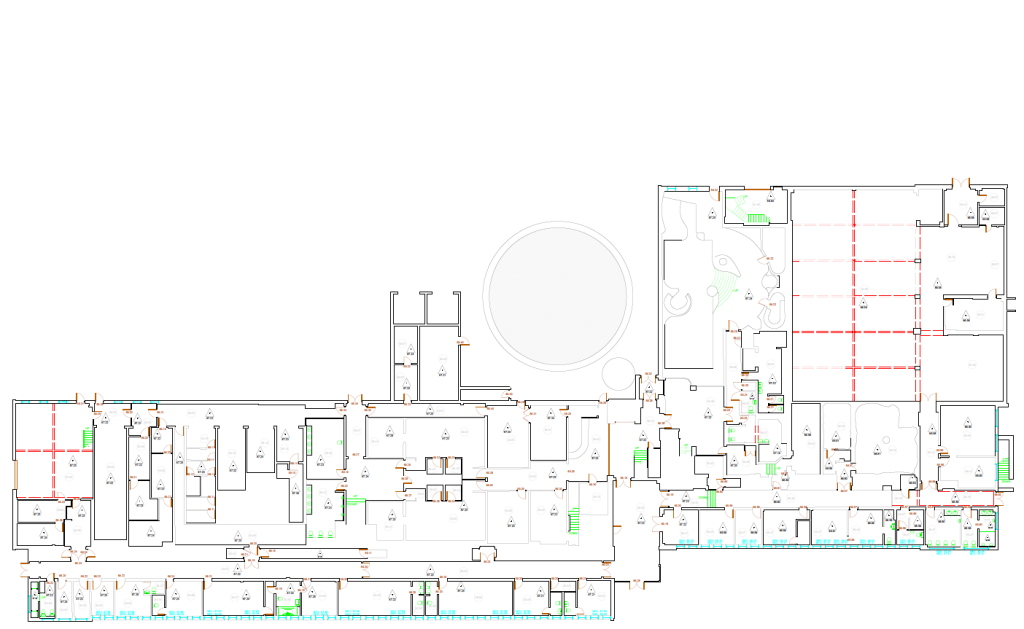 A floor plan is beneficial because it shows the floor from a bird’s eye view. Floor plans for The Houses of Parliament could be used to see the layout of rooms, corridors, and halls within the building for redevelopment or refurbishment purposes.

Due to the age of the Houses of Parliament, the internal floor plans would show any discrepancies in the floor level where the building has been added to, changed, or maintained over time. 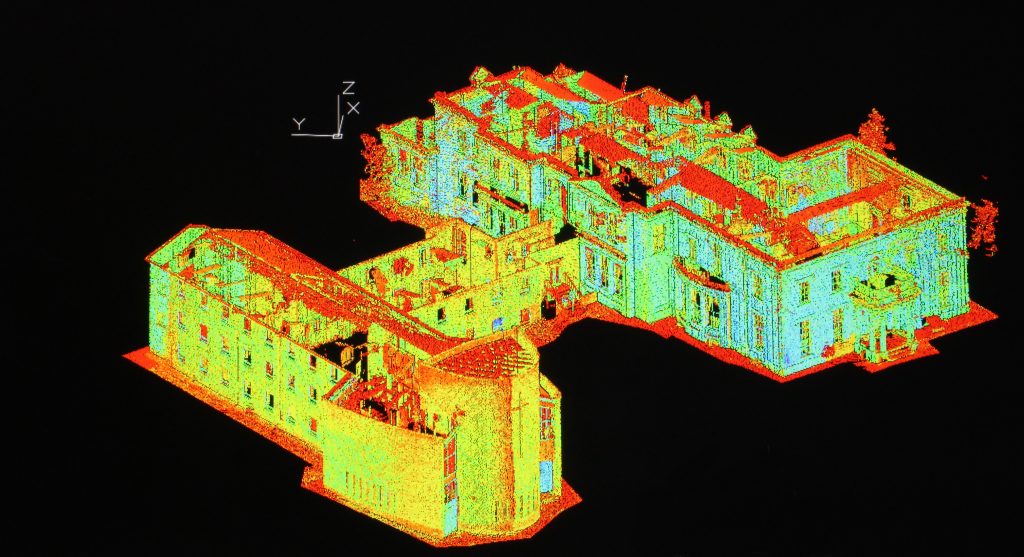 3D models are created from point cloud files collected by 3D laser scanners. The intended building, the site topography, and the surrounding environment are typically included in our client’s designs and a 3D model can bring the intended project to life.

3D digital models have a variety of benefits ranging from: 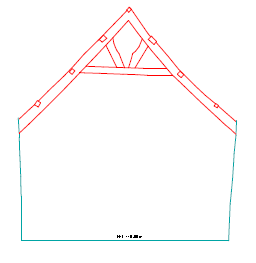 What’s the difference between an internal elevation and a building section?

The main difference between an internal elevation and a building section is how they are drawn up. Internal elevations are an accurate depiction drawn along the face of an internal wall, with the viewpoint being inside the building so it will show the all-feature detail, such as windows, walls, beams, light fittings, wood panelling and doors along that face. Whereas a building section is drawn centrally within the building showing the construction along the specified line including external, internal, and multiple floors.

If we were asked to create a building section through the below image running through the doorway, we would show the outline of the walls and the floor. Some of the details would include the stained-glass window, door frames and archways, seating, and ornate details, but the features behind or in front wouldn’t be in the section, as they aren’t referenced in that slice of data. 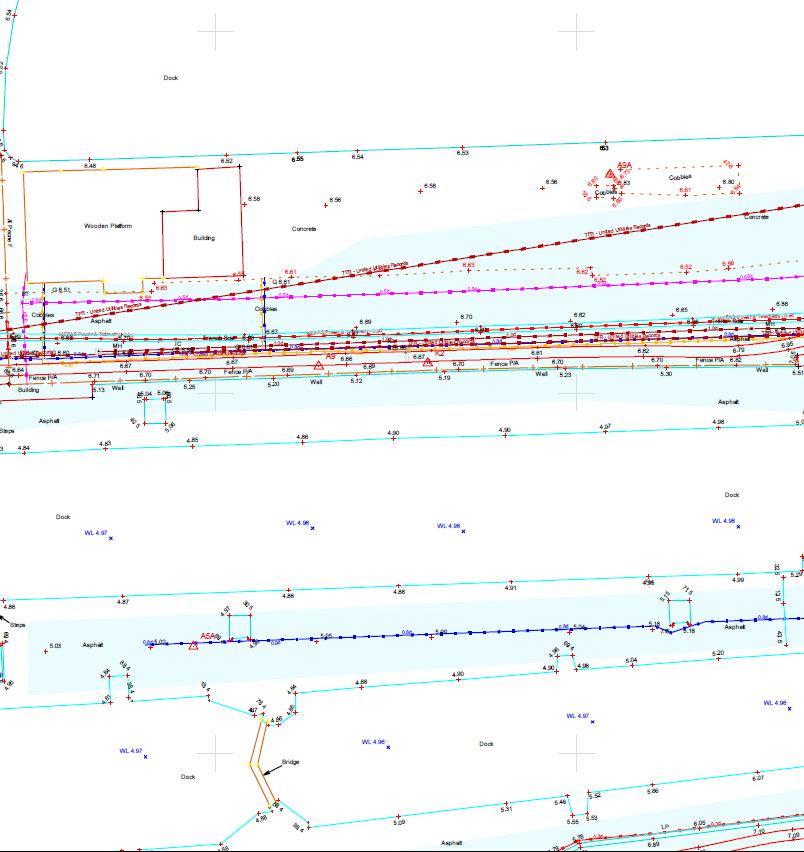 By law (HSE regulations), anyone planning to dig must be aware of the location of any underground utilities before breaking ground. The full-service locations provided by Powers will meet the necessary PAS 128 British Standard. They display the location, nature, and depth of active, dormant or redundant service networks according to PAS 128 Quality Levels.

An underground utility detection survey would show information under and around the Houses of Parliament, which would greatly reduce the risk of damage to the utilities and the building if any intrusive works occurred.

The Importance of Data Security of Infrastructure Drawings and Models

Although it’s important to have full topographic, measured building and underground utility plans of a public building, the data detailing its internal workings could be a security risk if it got into the wrong hands. If Guy Fawkes and his co-conspirators, individuals, or organisations with malicious intent, were able to find the drawings with confidential information on them, they would be able to determine the weakest points of the building, and easily blow it up.

Surveyors within the profession understand that drawings or models of large public buildings and infrastructure cannot be shared in the public domain. This applies to all survey services, and not just measured building surveys and Powers underpins this knowledge with Cyber Essentials Plus certification.

If you require a full suite of topographic surveys, measured building surveys with internal or external elevations, or underground utility detection surveys we can help. These surveys are valuable tools for those working in the heritage, restoration and renewal sector or architectural industry as it shows exactly what details are there at a certain point in time.

If you have a project that would benefit from having one of our many services, contact us for a free quote. You can call us on 01928 734473 or email surveyors@powersuk.com.

We look forward to working with you.