Print PDF Project
Powers carried out the topographical surveys for the new, award-winning spa at Carden Park Hotel in Cheshire, providing background information on how the new spa could be designed, what it could include and the general geography of the site. Once designed, Powers undertook the setting out of the new spa. The survey allowed the project architect to design and site the spa to make the maximum visual impact, while the setting out ensured that the construction did not deviate from the design. Powers has gone on to survey the rest of the buildings on the site, including the entirety of the Carden Park Hotel. 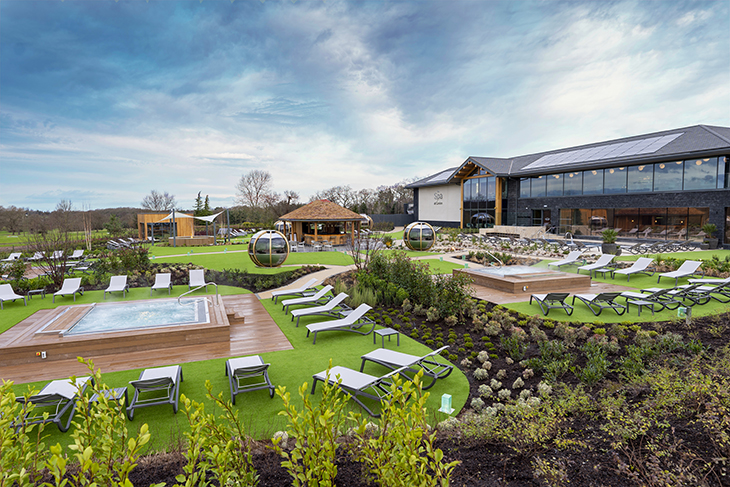 Carden Park Hotel is a multi-award-winning luxury leisure resort in the heart of the Cheshire countryside. Across the 1000-acre site, there are two golf courses, spa, gym, a four-star hotel, AA Rosette-awarded restaurants, plus a wide range of leisure and business facilities, including wedding and conferencing capabilities. It’s located in stunning countryside near picturesque Peckforton Castle and Beeston Castle, and is only a 20-minute drive from Chester, Cheshire’s historical county town. The hotel has 198 bedrooms, some of which look across the Nicklaus golf course, named after its designers, golfing great Jack Nicklaus and son Steve. There’s a range of further countryside pursuits, including an off-road driving experience, and for business matters, the site includes conference and business venues across 18 meeting rooms.

The latest addition to the estate, the £10 million spa opened in January 2020. The Spa at Carden includes a multitude of treatment facilities, including both indoor and outdoor vitality pools, open-air hot tubs, steam rooms and both indoor and outdoor saunas. There’s a spectacular all-weather proof Spa Garden, 14 treatment rooms, thermal facilities, plus a restaurant, Elements, with views spanning the Spa Garden and across the estate. The bespoke interiors were created by interior designers Barr & Wray, with the accent on elegance, wellbeing, relaxation and nature.

Land and measured building surveyors, Powers was engaged on the Spa at Carden project in the early stages of development. The surveying project continues its longstanding relationship with Carden Park Hotel and Bridgemere UK plc, which began in the 1990s. This dates back to the first development of the site as St David’s Park Hotels, as the site’s operators have always been keen to work with local firms where they are able to.

In 2016, Powers carried out a comprehensive topographical survey of the land, the courtyard, the parking areas, and internally of the existing spa and restaurant, and the Prince of Wales Suite.  This included establishing levels for the three floors, and setting out profile boards externally on site as references points, to denote changing levels. The topographical surveys were carried out at an early stage, to provide background to how the new spa could be designed, what it could include and the general geography of the site.

The survey allowed the project architect HB Architects to design and site the spa to make the maximum visual impact. Carden Park is a very high-end hotel, with an impressive approach drive, and it was imperative that the orientation and level of the spa building makes the best first impression to visitors.

In 2017-18 Powers then carried out the setting out of the new spa, which is situated off side to the hotel frontage, on an area that was formerly used for championship golf tees and outdoor activities. Also, as part of the project, in January 2018 Powers created 3D scans of the original spa area to enable the development of a new state-of-the-art gym.

Over the decades, Powers has surveyed almost all the Carden Park site, from one aspect or another, as part of a series of different development projects. These have included surveys of the woodland and lakes, the old spa, and remedial/redevelopment work to the properties Barton Lodge and Windmill House. In the case of Carden’s original spa and The Vines, a former brasserie redeveloped as a high-end restaurant, the surveys have informed what the hotel has been able to do with the site.

Its ongoing relationship with the hotel has helped the company to build a comprehensive topographical and surveyed picture of much of the 1000-acre estate and its many features. Solutions to issues such as the site’s planting, ecology and even drainage issues, with the siting of the many brooks, pools and watercourses have been developed thanks to the information from these surveys.

The company’s knowledge of the site has enabled the team to work efficiently at the site, which minimises the unexpected challenges that emerge. During the spa project, the Leisure Suite was still in use, so Powers’ surveyors were measuring up and scanning when people were there. There were also access issues, at the busiest times. Another unexpected hazard of working at a functioning golf resort was safely carrying out a levels survey in a controlled way, while the golfers were practising.

The topographical survey work carried out at Spa at Carden has enabled the architects, designers and builders to create a first-class luxury spa experience like no other. The success of the project and the end result have exceeded all expectations, with a highly positive response from visitors. The Spa at Carden opened its doors in January 2020 and has been welcoming guests, restrictions permitting and adhered to, ever since. It has already won accolades including ‘Best New Spa’ in the 2020 Good Spa Awards.

Jonathan Masters, Director at Bridgemere UK, said: “We always strive to work with local businesses, and Powers has continually been able to deliver excellent surveys for our projects. The company’s background surveys – be it the restaurant, gym or more recently the spa – ensure that the project has a solid grounding from the outset and are the origin of how the projects then go on to take shape.”