Powers was engaged by Planit-IE to provide a topographical survey of Christleton Village, to help formulate the design options available to the council. The survey included the carriageway and road widths, along with the various key levels and curb alignments, with the aim of providing information to enable a plan that enhances the heritage, conservation and atmosphere of the village to be developed. A Heritage Assessment has been completed by the Parish
Council, which concludes that the heritage of the Village Green is enhanced by the proposed changes. 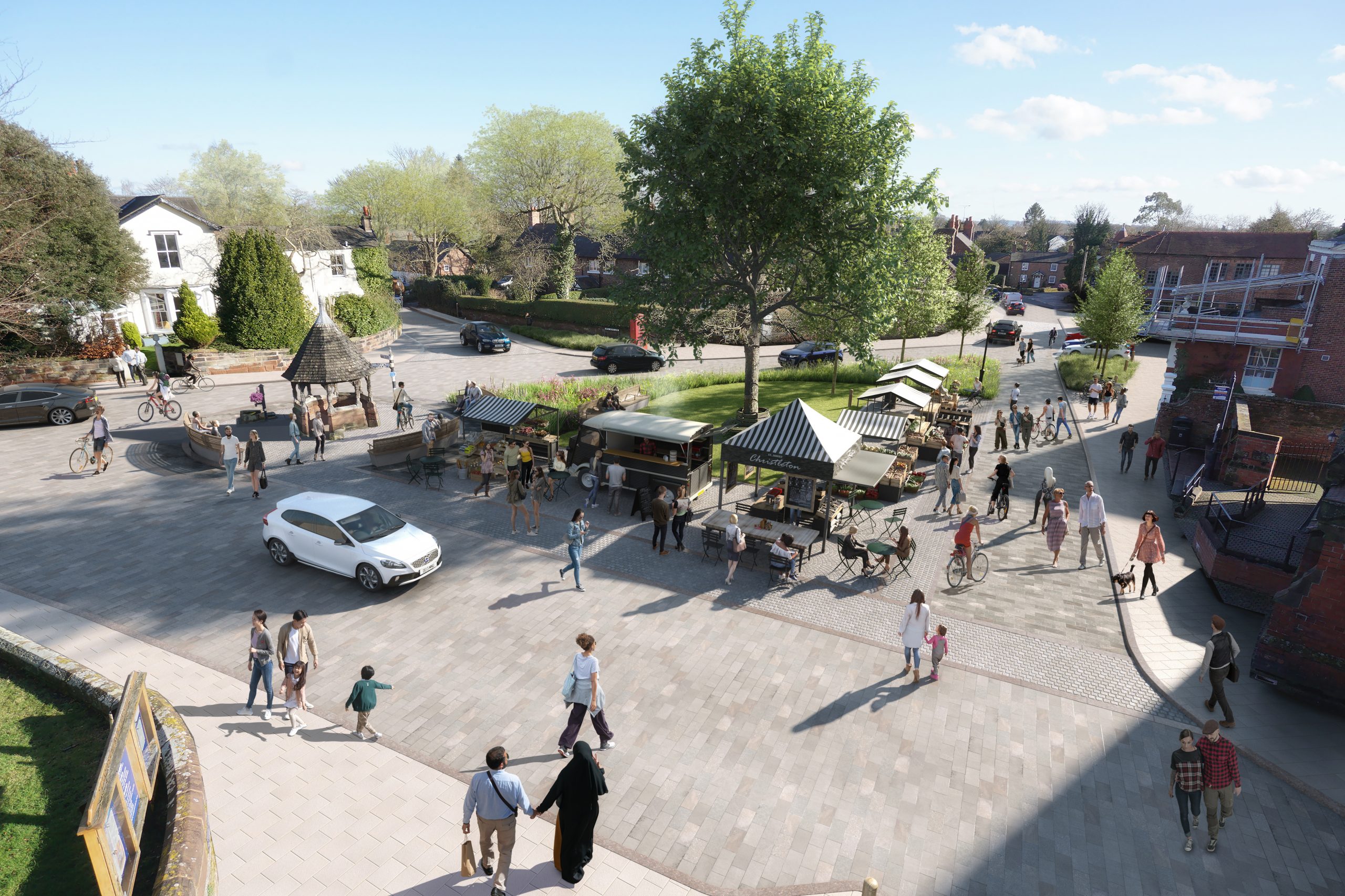 Christleton is a village in West Cheshire, near the historical town of Chester. The Parish Council is looking to make a number of improvements to the centre of the village, which comprises an area outside St James’ Church, where a four-way road junction forms a triangular island. Further down Village Lane is another junction, which is very busy at peak times, due to the entrance to Christleton High School. Amenities in the village centre’s vicinity include Birch Heath Lodge Care Home, Chester’s University of Law, the Ring o’ Bells pub and restaurant, and Christleton Institute, as well as many private residences.

As part of the general project of environmental (Clean Air) and aesthetic improvements to the village, a design exercise has been undertaken to look at what changes could be made to the external infrastructure and environment within the village, its road system and pavement access.

As part of the design process, Powers was engaged by landscape architects and urban designers, Planit-IE to provide a topographical survey of the area, to help formulate the design options available to the council. The survey included the carriageway and road widths, along with the various key levels and kerb alignments, with the aim of providing information to enable a plan to be developed. This was particularly important in context to the Village Green. A major issue in the village is traffic flow, which the survey and wider consultation will address.

Due to the presence of the school, the Law College and other amenities, approximately 2,500 vehicles pass through the village daily. 1,200 of these are between 3:30pm. and 7:30pm. Furthermore, it has also been identified that the village centre is being used by motorists as a cut-through between the A41 and A51, two main routes into Chester and out towards Manchester, the motorways and Whitchurch.

As a result, the council aim to make the village centre more pedestrian and cycle-friendly, whilst improving traffic flow. The new design for Birch Heath Lane and Plough Lane could look to reduce the number of vehicles significantly. The addition of a cyclist/pedestrian priority road on Rowton Bridge Road will change the atmosphere and aim to reduce vehicle speeds.

The topographic survey is key to establishing where carriageways can be narrowed and footpath widths maximised, cycle/pedestrian routes installed, and if necessary, changes to traffic controls and parking areas.

The village centre and its junctions are often busy with general traffic, and passage through the centre is usually funnelled down to single lane. This is due to vehicles parked on the side of the road, outside residences and shops.

However, as the work was carried out during lockdown, the biggest challenge was parked vehicles and busy pedestrian areas.

The project has recently undertaken a public consultation with local residents, with over 85% in favour of the proposals. The Parish Council and partners will now look to source funding for developing the designs to the next stage of detail and implementation.

The overall aim of the project will result in a substantial reduction in flow through the village being achieved, with cleaner air and less peak-flow congestion. By encouraging cycling and walking over car use, a safer and more pleasant environment for residents will be created.

In response to the challenge of enhancing the heritage, conservation and semi-rural atmosphere of the village, a Heritage Assessment was commissioned by the Parish Council and concludes that the Heritage of the Village Green is enhanced by the proposed changes.

Danny Marsh, Principal landscape architect at Planit-IE, said: “Powers is based locally to Christleton and so the team were already familiar with the area. They provided a detailed topographical survey, which enabled us to develop our plans, which aim to improve the environment and benefit the local residents.”