Powers has provided Peel L&P with an up-to-date topographical survey and underground utilities survey of Liverpool Waters. The underground utility trace adds additional detail to the original topographical survey that was carried out, to help inform the design and master planning document. In addition, the surveys offer a useful overview of this multifaced site, which will provide early-stage design information for developers. The underground utilities survey is particularly important, as the land is former dockland and dates back to the Industrial Revolution. 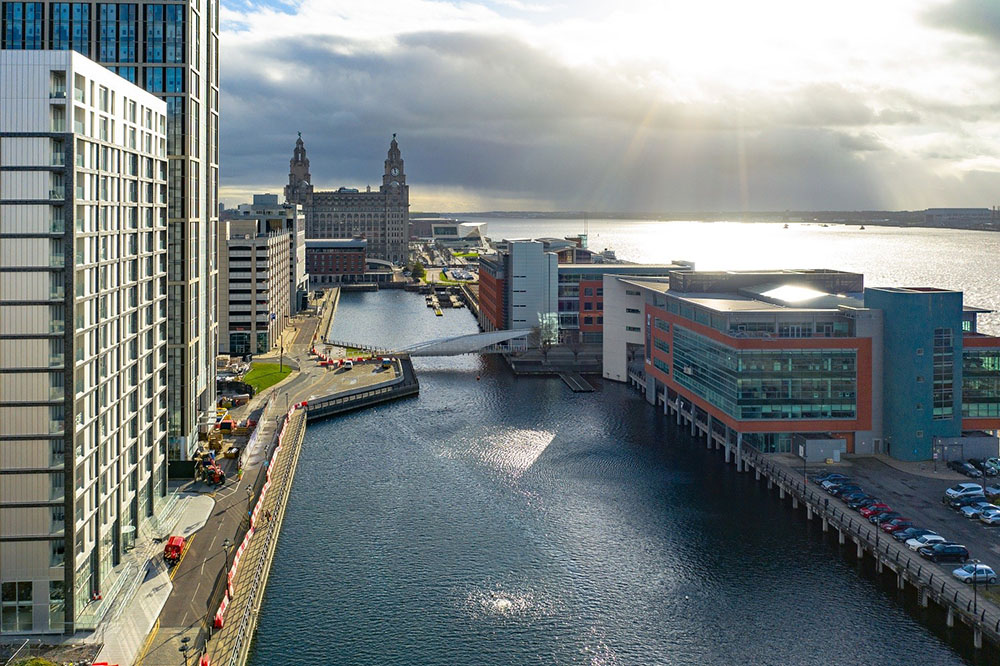 Peel L&P’s Liverpool Waters will transform the city’s historic northern dockland, regenerating the 150-acre site to create a world-class, mixed-use waterfront neighbourhood in central Liverpool, for everyone to enjoy. Together with Wirral Waters on the west bank of the Mersey, this project will significantly benefit the structure and economy of the Liverpool City Region.

Peel L&P is a well-known regeneration business, established in 1971, and has a portfolio of assets worth £2.6 billion. The company is responsible for some of the most transformational development projects across the UK.

The Liverpool Waters masterplan is comprised of 20 million square feet of development which includes 9,000 homes – 1,000 of which have already been committed or delivered. The development will create five new neighbourhoods, jobs, homes and a world-class leisure and tourism destination, which already includes luxury hotel accommodation, with the Malmaison and Crowne Plaza located at Princes Dock. The ambitious Liverpool Waters scheme will eventually be home to substantial office space, a new cruise liner terminal, hotels, new roads and infrastructure, and much more.

One neighbourhood which will play a huge part in the regeneration of Liverpool is Central Docks, a new and exciting residential, business, entertainment and leisure district. This alone will include 3,800 homes, a public park, 550 hotel rooms and 166,000 square metres of office space – becoming the beating heart of the project.

The gravity of adding Liverpool Waters to the city’s existing waterfront offering will see Liverpool competing with the likes of Hamburg, Boston, Toronto and Barcelona in terms of the scale and diversity. The approval of Liverpool’s bid to become a turnaround point for international cruise liners is the next chapter in the close relationship between public and private sector partners, which are working together to deliver a seamless integration of waterfront assets, to continue the city’s remarkable transformation.

Powers has a longstanding relationship with Peel L&P, with the company often preferring to work with local, family-owned businesses. Powers has also worked on numerous Manchester-based regeneration schemes for the regeneration business in the past.

The involvement, as part of Liverpool Waters’ delivery team started in July 2018 and since then Powers has worked intermittently on the project – continuing to do so under the instruction of Peel L&P. Powers has provided Liverpool Waters with an up-to-date topographical survey of the area and also an Underground Utilities Survey. The Underground Utility trace added additional detail to the original topographical survey that was initially carried out.

One of the biggest challenges Powers faced was linking back the original topographical survey and tying in new information from the most recent one carried out. It all needed to be pulled together to provide results that were comprehensive, accurate and coherent for the overview of this multifaced site. There were also the basic logistical problems of dealing with such a large site, due to foot and vehicular traffic, and also access across many premises and locations. Lifting machinery was also required to lift some of the utilities covers, which were too unwieldy and weighty to remove by hand, to allow access to service ducts. The project required a quick turnaround timeframe.

The topographical survey will be used for the design and master planning, as well as also providing useful, early-stage design information for developers. The underground utilities survey, detailing the direction and type of services underground, is particularly important, as the land is former dockland and dates back to the Industrial Revolution, meaning any unknown, hidden or buried assets below ground could present the biggest risk for the development. Future redevelopment on the site will be heavily reliant on this new data due to its dockland heritage and multitude of previous uses and tenants.

Phil Jones at Peel L&P said: “We’ve engaged Powers on survey projects in the past and have always been very impressed with their efficiency and professionalism. They share our ambition and we were able to communicate directly with the owner and discuss our requirements for this complex and large-scale project.”