Alexander House is an underutilised office building in the heart of Trafford, Manchester. The building is receiving a new lease of life from Blueoak Estates, a company known for re-purposing similar buildings across the North West. Alexander House is located within the Trafford Civic Quarter Action Area Plan (AAP) and its redevelopment will deliver 116 apartments along with elevation enhancements. Find out more in our case study on how Powers have supported Blueoak Estates to prevent this building from being demolished and repurposed into new homes. 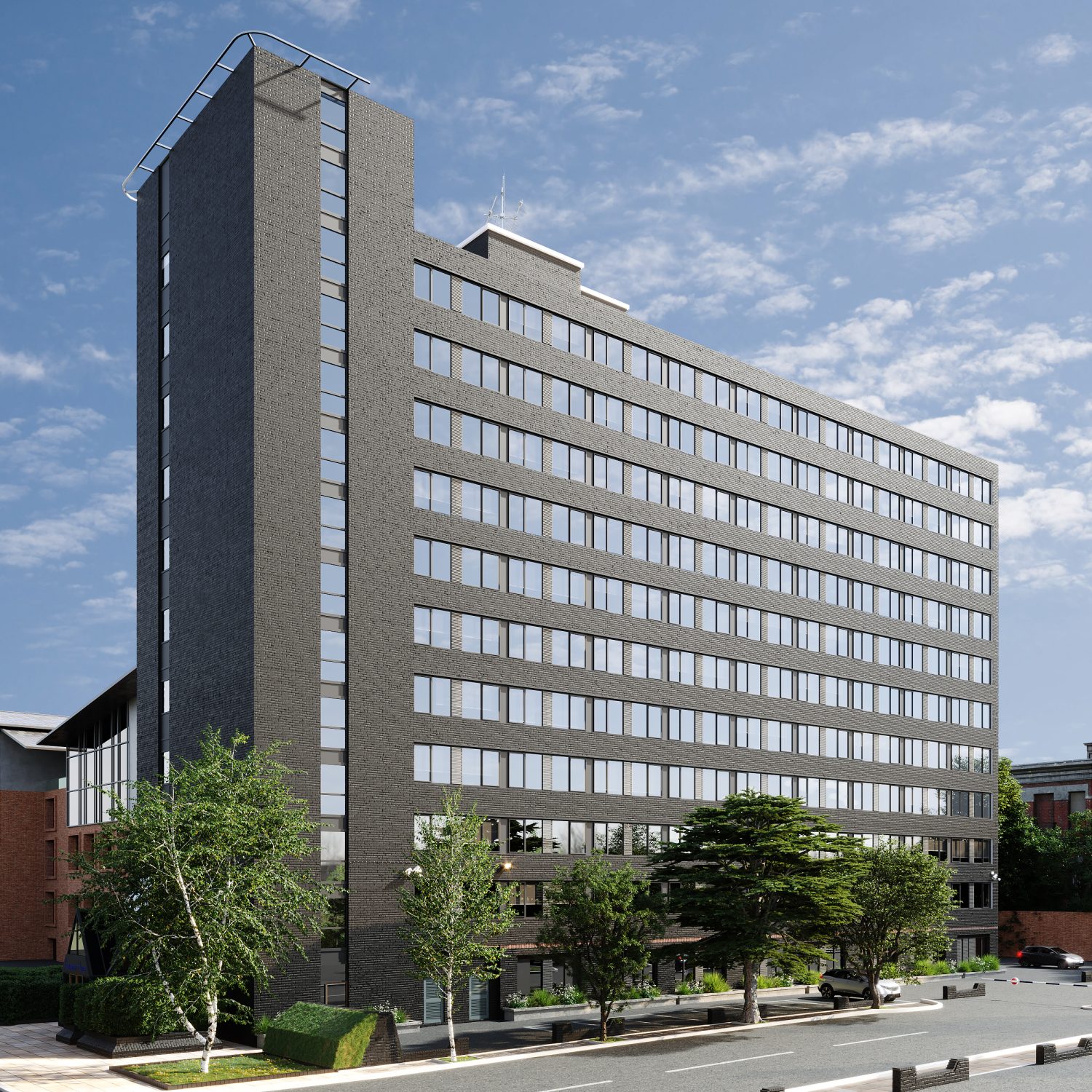 Project completion:          Power’s involvement was during May 2022. Construction work commences in July 2022, with a completion date of September 2023 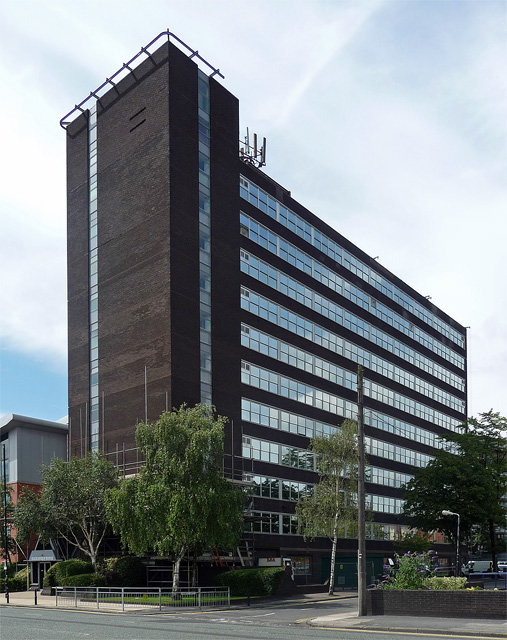 Constructed in the 1970s, Alexander House is located on Talbot Road which sits within Trafford’s Civic Quarter AAP. The building lies near the former Kellogg’s site in the Central Neighbourhood area. The AAP aims to create a new sustainable, diverse, and vibrant mixed-use scheme that builds on the area’s existing businesses and residential neighbourhoods. Its important civic role celebrates its hidden heritage and makes the most of its connectivity to neighbouring cities and the opportunities this can bring.

The Client is an award-winning residential developer, operating across Cheshire, the Wirral and Manchester areas. Instead of demolishing and re-building, they are redeveloping and rejuvenating the building and converting it into modern apartments due to the changing nature of work patterns and the resultant reduction in the demand for office space. 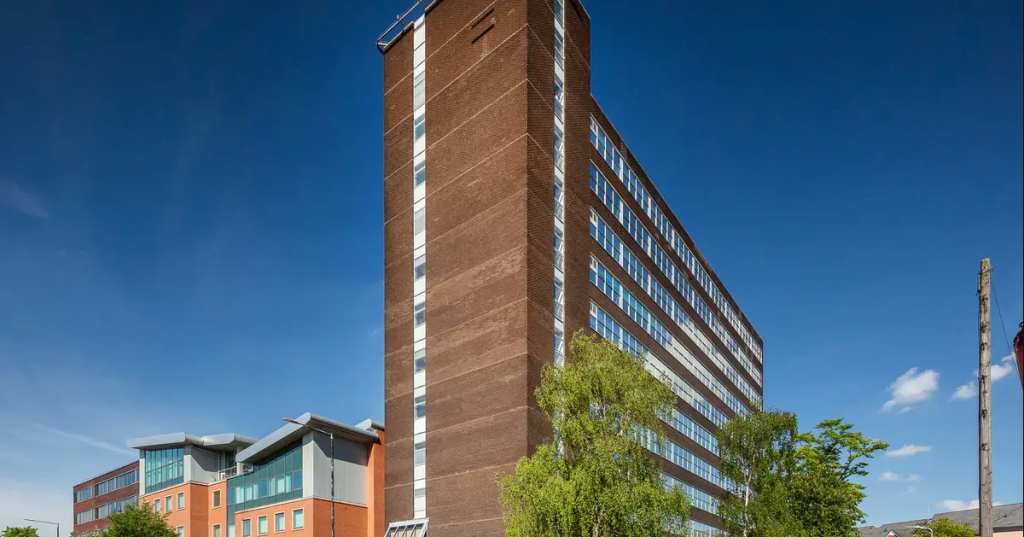 Powers were appointed by the Client to carry out a measured building survey on the façade of the building, to create external elevations. The team were also tasked with creating floorplans for each floor. The surveys produced by the Powers team allowed their Client to gain planning permission to convert the building into 116 new apartments.

A large ground-level car park that served the offices is now under review to maximise the use of land, as not all the spaces are required to serve the apartments due to the site’s location. The area will serve as a sustainable hub with better public transport links and all local amenities are within walking distance. The Powers team completed a topographical survey of the area, providing Blueoak with an accurate drawing on which to base their feasibility works.

Prior to the survey drawings provided by the Powers team, the measurements that the Client’s team used, were based on inherited valuations and marketing floor plans from the vendor’s agent, which did not provide the level of accuracy required. The drawings supplied by the survey team at Powers, were accurate and precise, giving the Blueoak team the correct measurements and information they needed to properly plan and develop their designs.

Accurate floorplans were crucial in calculating the contract value of the development. The contract value is based on the price per square foot, therefore accurate Gross Internal Floor Area measurements are needed. Having the internal floor plans completed by Powers meant the Client was able to calculate the Gross and Net Internal Areas. This meant they were able to move forward with clarity and confidence and get the apartment designs approved under the latest Prior Approval criteria to conform with the Nationally Described Space Standards (NDSS) requirements.

For the scheme to be considered under the Prior Approval Application process, certain requirements must be met. One of them is to be compliant with the NDSS conditions, which specify internal floor areas must measure to the finished plasterboard face for the apartments to become occupied. The accurate floorplans and surveys created by the team were critical in confirming these criteria were attained.

An accurate building survey is crucial for Blueoak to produce technical drawing pre-application packages, which include cost certainty and the resolution of details. The survey team were able to provide Blueoak with all the vital spatial data required, helping to produce the information for the technical drawing packages for planning, ensuring costs were kept to a minimum and finding solutions to any technical issues relating to the build.

Alexander House has been given a new lease of life and a fresh façade, delivering a place for people to call home. A total of 116 new apartments will be created which will welcome their first occupants in 2023.

Along with the other buildings in the area, Alexander House will help create a vibrant neighbourhood for residents and visitors, supporting regeneration through to a mixed-use neighbourhood.

Repurposing and redeveloping an underutilised office building is an example of the construction industry’s commitment to delivering regenerated and sustainable projects. Blueoak has set an example of what the future of construction should be, by regenerating this building that would at one time have been knocked down and replaced with a newer building, and by producing less waste and reducing CO2 emissions.

Gareth Pritchard, Principal of PAD, Architectural Consultancy, working with Blueoak Estates – “Blueoak is synonymous with the sympathetic conversion of existing buildings to residential use, whether they are listed churches, mansions, or redundant office buildings. Having the Powers team on-site conducting topographic and measured building surveys means we have all the valuable and essential data we need so work can begin on Alexander House, and we’ll be able to welcome new residents in early in 2023.”